We had three severe crashes recently, which can not be attributed to pilot errors. The models’ controls moved so fast and violently that it would be almost impossible to replicate this, even with the most nervous thumbs.

Equipment failure is the first thought, however, the three incidences were very similar and occurred with different radios.

I’m no expert in this field, but investigated the possibilities and came to the following conclusions. However, nothing is being ruled out or in, at this stage.

The modern RC equipment uses a code as part of the control signals (like a password), which is bound to a particular transmitter and receiver. Even if another transmitter is exactly on the same frequency, the signal will be dismissed by the receiver. While we can’t rule out interference completely, it is highly unlikely.

In our crammed cockpits, we place the receiver’s antenna wherever we find a place. This place is not always ideal. I had the suspicion that the battery or other objects may shield the receiver from the transmitter signal. While this can be the case, it would be only for a very brief moment. In addition, the receiver would leave the servos at the position of the last good signal – no violent movements.

Radio Frequency Interference of the Electronics

Now, this is interesting and a possible problem. This is NOT an interference of the frequencies, but an interference with the functioning of the electronic circuits. Far fetched? Could the mobile phones be the culprits?

I found several sources, but want to quote two.

Let’s start with a general quote from Wikipedia:

“Electromagnetic interference (or EMI, also called radio-frequency interference or RFI when in radio frequency) is disturbance that affects an electrical circuit due to either electromagnetic induction or electromagnetic radiation emitted from an external source. The disturbance may interrupt, obstruct, or otherwise degrade or limit the effective performance of the circuit. These effects can range from a simple degradation of data to a total loss of data. The source may be any object, artificial or natural, that carries rapidly changing electrical currents.”

The next quote is longer and from a research paper of the Department of Electrical and Computer Engineering, University of Maryland:

“Radio Frequency Interference (RFI) can have adverse effects on commercial electronics. Current properties of high performance integrated circuits (IC’s), such as very small feature sizes, high clock frequencies, and reduced voltage levels, increase the susceptibility of these circuits to RFI, causing them to be more prone to
smaller RFI levels. Besides, recent developments of mobile devices and wireless networks create a hostile electromagnetic environment for IC’s.

Numerous other structures in a computer system (e.g., external wires, cables, PCB traces, bonding interconnects, chip pins like power, ground, and data lines), can act as antennae in the presence of RFI, which is either radiated from powerful radio transmitters, wireless network devices, mobile phones and PDAs, or intentionally generated for malicious reasons. These unintentional antennae can serve to couple RF noise into the core circuit. RFI that is coupled by the system can induce unwanted currents, which cause various disturbances. Also, current high performance integrated circuits (IC’s), such as microprocessors, have very small feature sizes and are clocked at frequencies well into the GHz range while operating at reduced voltage levels. Although this has improved the ability and performance of modern systems, it has also increased their susceptibility to RFI.”

My suspicion is that the mobile phone may interfere with the circuit board of our radios. However, the phone needs to be in very close proximity, which it is when you carry the phone in the pocket. In my case, I have the transmitter at pocket level, right next to the phone, almost touching. The electromagnetic radiation from the phone degrades rapidly with distance. In other words, someone’s phone close by would probably not interfere with the electronics of the transmitter.

My conclusion is to be seen as a strong suspicion and not as proof. From now on, I will leave my mobile phone in the car – just in case. 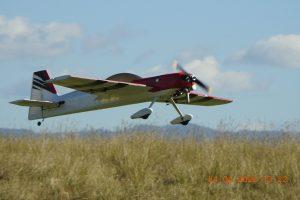 Come join us for a fun fly on Thursday 26th to celebrate Australia Day on beautiful East Coast at St Helens. Starts at 9am. General Flying for all MAAA Members. 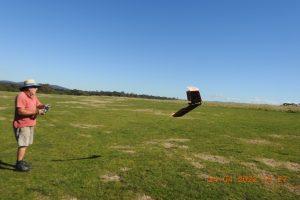 Another post with a photo gallery from our weekend of flying. 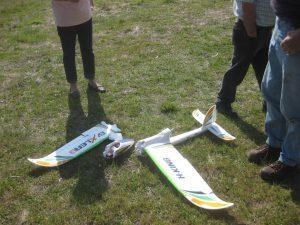 Amongst RC pilots there has always been the discussion on what flies better: foamies or balsa-built models. The balsa group created the catch phrase “Balsa flies better.” One can even