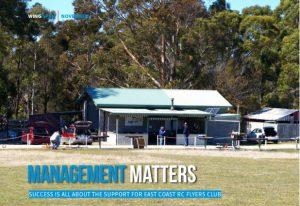 The valued support of the community, some generous sponsors, along with an encouraging ‘all are welcome’ attitude, has resulted in a club success story for the Tasmanian based East Coast RC Flyers.
Since its inception in August 2013, the unwavering enthusiasm for the sport of flying radio controlled
models has meant that founding club president, Alan Butler has triumphed despite having to literally start from the ground up.

“I started by teaching myself how to fly my model plane next to an adjacent paddock, but I grew tired of not having anyone for company,” said Alan. “Then I heard someone was flying planes off the sand dunes so I made up a flyer, placed it on a window and it basically all took off from there.”

Alan and a few dedicated members literally built the club from the ground up, refusing to be  disheartened by this, then, limited resources.

“When we started out there was no airfield and we were throwing planes out into the air like gliders onto the rough grass,” said Alan. “However, that didn’t last long as one of our members knew a farmer who had a spot for us in a field, which had a hangar where they used to fly ultralights. So, we started
from there and had the hangar to use too.”

Unfortunately, a mains water pipe that ran through the middle of the property resulted in radio signal disruption for the planes. Luckily, the owner had an alternative property that was far more ideal and an advantageous arrangement was struck.

“When it came time to register the airfield through CASA, we needed some form of permanency so he set up a ‘peppercorn agreement,’ which allowed us to have the lease for the property for 10 years for just $11,” said Alan.

The self-sufficient property came with its own water facilities. The club members consider themselves very lucky, as they are well aware that many older clubs don’t have the facilities that they have.

“We’re also grateful to have generous sponsors who came onboard to support us, including the IGA’s at St Mary’s and St Helens that I approached for permission to set up a barbecues outside the front. They went one step further and gave us all the sausages we wanted for the barbecues too.”

In a clear indication of the club’s all-inclusive approach, members range from 8 – 84 years of age, flying everything from gliders, pattern models, 3D, pylon racers to jets and helicopters.

“We pretty much encourage anything that moves,” said Alan. “We don’t restrict anyone – at the end of the day it’s all about enjoying yourself. If we can make it fun during the day with a little something different then, well why not.”

The appeal of regular Fly-In days is pivotal toward persuading other people to have a go and potentially join the club. Prior to becoming a registered member, Alan said visitors were welcome to come to the club a total of three times and sign the book. He reinforced the positive benefits of having a club that always opens their flying field to enthusiastic pilots.

We often find that people buy planes, fly them and they may last only ten seconds before they crash,” he said. “Anyone who is interested in model flying and visits our club, finds it’s rare for them to have an accident as we use “The Buddy System” and they can experience the thrill of flying and learn with the assistance of experienced flyers.”